Until recently, Azure DevOps had offered separate build and release views for its users. This was a little different from pipeline features in other CI/CD tools like Jenkins, where if you build a pipeline, it is a single unified experience. With recent update, they have released unified experience for the Multi Stage Pipelines. Now one can use a unified YAML experience and configure Azure DevOps pipelines to do CI, CD, or CI and CD together. This not only allows to control the build configuration as part of the source code but releases as well. In this blog post, we are going to create and work with the same.

Since this feature is under preview, as of writing of this blog post, one needs to go to preview features from his user profile, and enable the same by sliding radio bar to the right: 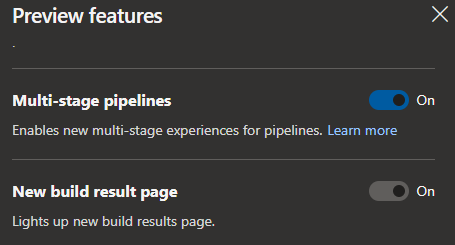 A bit about syntax

Stages consists of one or more jobs, which are units of works assignable to a build/release agent. Jobs consists of linear series of steps. Each step can be a simple task such as echo or a complex script or some other task referring to 3rd party like manual intervention etc.

To know more, one can read about the Azure DevOps YAML syntax here.

hosted with ❤ by GitHub

There are couple of interesting features like deployment and strategy with what was the usual YAML.

Also, we can view deployments made on a environment using Azure Pipelines:

More capabilities will be added to environments over time, and we’ll cover those under separate blog posts.

This impacts the deployment strategy, which defines how your application is rolled out across the cluster. The default strategy is runOnce, but in the future you’ll be able to easily indicate other strategies, such as canary or blue-green. Again, we’ll cover those under separate blog posts.

To create a pipeline, go to Azure Pipelines and select ‘new pipeline’:

After this, select one of the option to let it know where the Source code resides: 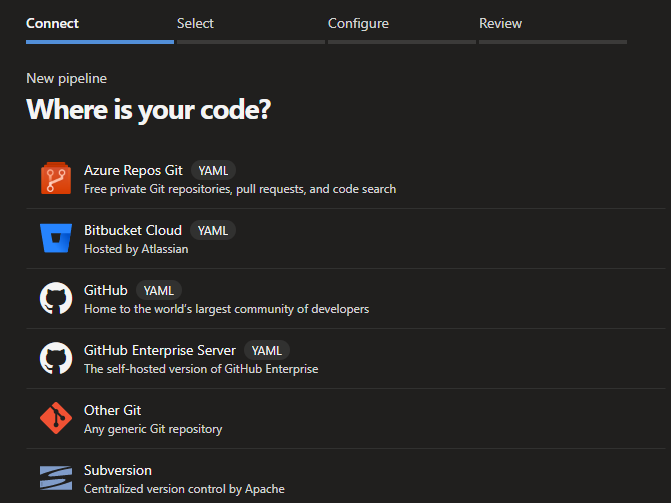 A small YAML icon next to the possible indicates that Azure DevOps will analyze your code and recommend a YAML template that makes sense for you and gets you up and running quickly. Select appropriate option to proceed.

After this, review and edit your pipeline as necessary and then click run to deploy the pipeline into action: 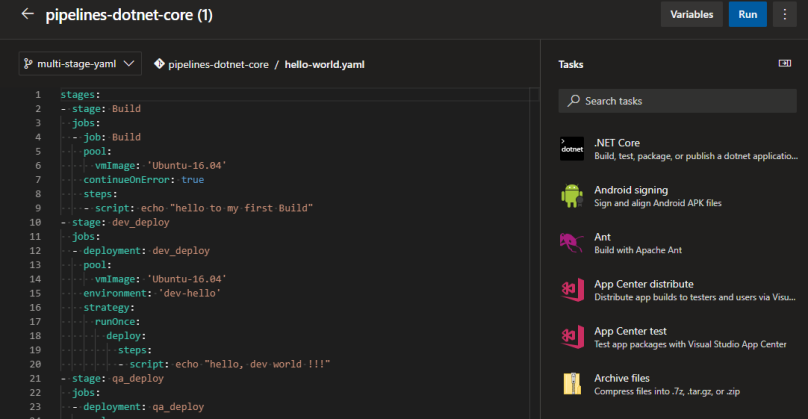 Once your pipeline is created, click run and then we can view the same in action:

You can click on the pipeline run instance to view more details about it:

Since we are now familiar with all the concepts, let’s create a real world dotnet core multi stage pipeline to deploy on azure web app by using below code:

hosted with ❤ by GitHub

In above code, we have created 5 stages: Build Source Code, Run Unit Tests, Deploy in Dev, Deploy in QA and Deploy in Production environment. Since building source code consists of smaller subtasks.

If everything goes well, you would be able to see the pipeline processing smoothly:

We can also go to Azure and verify we are able to access web app after deployment:

One can now choose to write either CI or CD or both of them using the Azure DevOps pipelines in YAML. This allows the configuration of both build and release as part of the source code.

If you are viewing this post on mobile, the source code might not be visible due to feature restrictions set by AMP. In such case, open this blog post in full browser.

The source code used in this blog post can be found here at GitHub and is available under blog/8496 and master branches.